Calculate interior angles of the isosceles triangle with base 40 cm and legs 22 cm long. 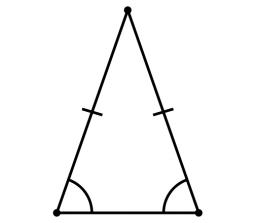