There is a given triangle. Construct a square of the same area. 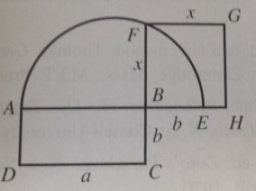