The two bodies move in the same direction evenly in a straight line, at speeds of 5 cm/s and 10 cm/s. The movement of the first body started 2 seconds earlier than the movement of the second body, from a point located at a distance of 20 cm from the starting point (where the second body was located). Draw a suitable chart in which you can find the place and time of the meeting. 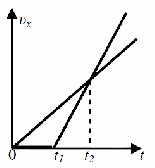