How many times must throw the dice, the probability of throwing at least one six was greater than 90%? 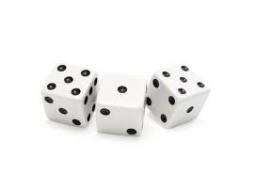