The garden has a rectangular shape and has a circumference of 130 m and area 800.25 m2. Calculate the dimensions of the garden. 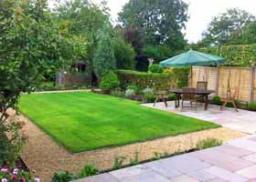