Initially the particle is 8 meters to the right of a fixed origin.

After how many seconds is the particle at the origin? 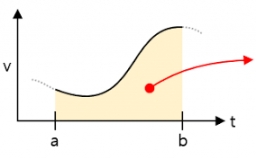