Calculate the interior angles of a triangle that are in the ratio 2: 3: 4. 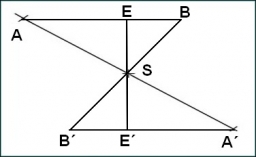