Calculate the length of the belt on pulleys with diameters of 105 mm and 393 mm at shaft distance 697 mm. 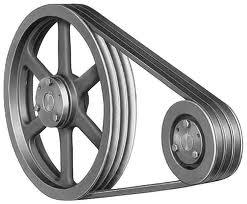