Welder do the job for six hours, the second one for 8 hours. How long do the job third welder if all together can do job in 2 hours? 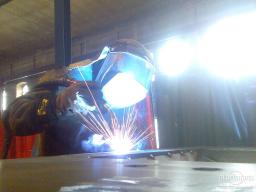