In elections, 12 political parties received this shares of voters:


Calculate what the shares acquired in the parliament if a quorum is 5%. 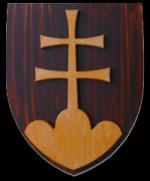