How many intersections have circles with radius 16 mm and 15 mm, if the distance of their centers is 16 mm. 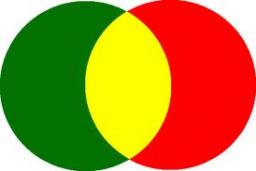