We have two dice. What is the greater likelihood of fall a total sum 7 or 8 ? (write 7, 8 or 0 if the probabilities are the same)? 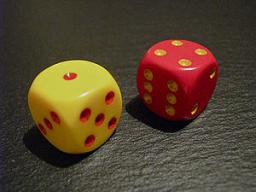 Tips to related online calculators
Our percentage calculator will help you quickly calculate various typical tasks with percentages.
Would you like to compute count of combinations?
See also our variations calculator.