The bus started from point A 10 minutes before the train started from the same place. The bus went an average speed of 49 km/h, train 77 km/h.
To point B train and bus arrived simultaneously.

Calculate the time of the train journey, if train and bus traveled the same distance. 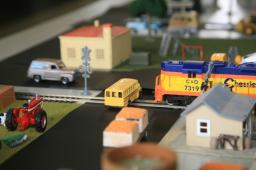