After the parachute is opened, the paratrooper drops to the ground at a constant speed of 2 m/s, with the sidewinding at a steady speed of 1.5 m/s. Find:

a) the magnitude of its resulting velocity concerning the ground,
b) the distance of his land from a tree over which the airplane dropped it at an altitude of 800 m above the ground (AGL). 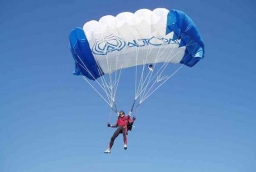