I think the number. I'll reduce it to its one-third. The result is then increased by one-third, and I get the number 12. 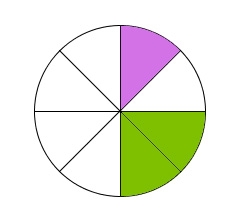