Man goes with a dog on a long walk 17 km from the house. Man is walking at speed 4.9 km/h and a dog that constantly running between house and man at 12.6 km/h. How many kilometers will run the dog when they reach their destination? 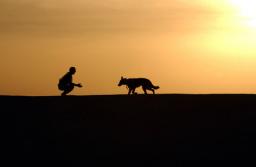