Calculate the length of the diagonals of the rhombus if its side is long 5 and one of its internal angle is 80°. 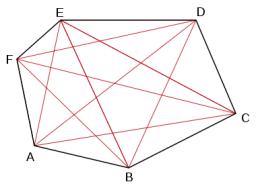