There are two distinct complex numbers z, such that z3 is equal to 1 and z is not equal to 1.

Calculate the sum of these two numbers. 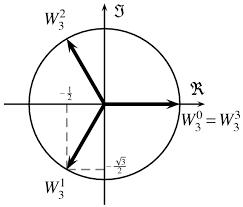