Juro built the ABCD square with a 12 cm side. In this square, he scattered a quarter circle that had a center at point B passing through point A and a semicircle l that had a center at the center of the BC side and passed point B. He would still build a circle that would lie inside the square and touch the quarter circle k, semicircle l and side AB. Find the radius of such circle. 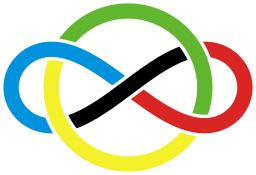