Calculate the absolute value of complex number -15-29i. 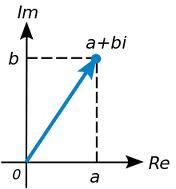 
Tips to related online calculators
Try our complex numbers calculator.
Pythagorean theorem is the base for the right triangle calculator.