If a person weighs 80 kg, how many kilograms of cork must take swimming belt to use it to float on water? The density of the human body is 1050kg/m3 and cork 300kg/m3.

(Instructions: Let the human body and cork on a mixture that has a density of 1000kg/m3. When make the equation you will compare the volumes of both components and the volume of the resulting mixture.) 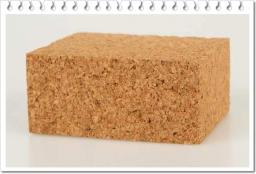