Point on the circle is the end point of diameter and end point of chord length of radius. What angle between chord and diameter? 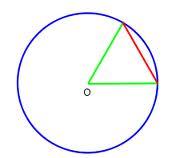