Find the equation of a parabola with its focus at (0,2) and its vertex at the origin. 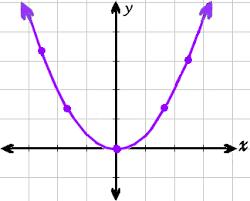