Angles of a hexagon

Find the interior angles of a hexagon if the sizes of the angles form an arithmetic sequence, and the smallest angle is 70°. 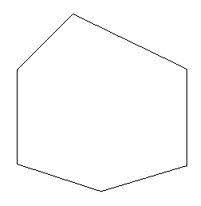