Eva loves symmetry in shapes and numbers. Yesterday she invented a completely new kind of symmetry - divisible symmetry. She wrote all five-digit numbers with different digits with the following property:
the first digit is divisible by 1, the second by 2, the third by 3, the fourth by 4 and the fifth by 5, regardless of whether the digit reads from left to right or from right to left.

List all five-digit numbers with Eva's divisible symmetry. How many are there? 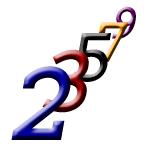