Find the surface and volume of a sphere that has a radius of 2 dm. 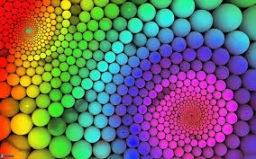