Circular flowerbed with diameter 8 m we split by concentric circle to circle and annulus with the same area. Determine the radius of the circle. 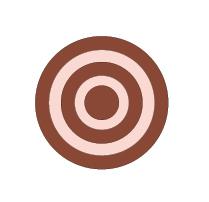