Camel owner wants to get out of the city into oasis. He bought 3000 bananas, which wants to sell in oasis. However oasis from the city divided 1,000 kilometers of desert.
Camel can carry at one time up to 1000 bananas, and for every kilometer traveled, eats one banana.

Camel owner, of course, wants to maximize his profits and thus needs to find the best possible strategy to move bananas out of the city into oasis.

What is the largest possible amount of bananas that he can import into oasis with his camel? 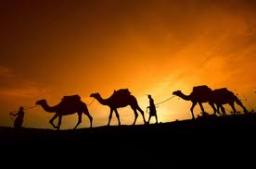