Calculate the diamonds' diagonals lengths if the diamond area is 156 cm square, and the side length is 13 cm. 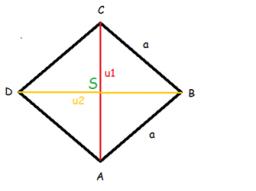