Calculate the height difference between two points on the railway distant 3539 meters. 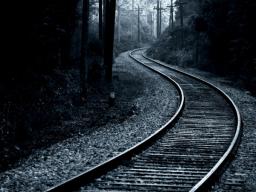