Determine angles of the right triangle with the hypotenuse c and legs a, b, if: 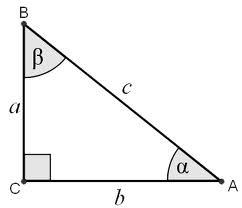