The isosceles triangle has a base ABC |AB| = 16 cm and 10 cm long arm. What is the length of medians? 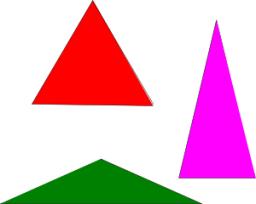