In a certain election there are 3 candidates for president 5 for secretory and 2 for tresurer. Find how many ways the election may (turn out/held). 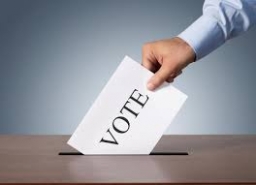