A regular hexagon of side 6 cm is rotated through 60° along a line passing through its longest diagonal. What is the volume of the figure thus generated? 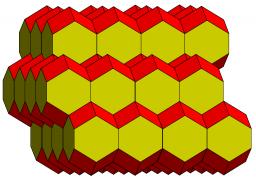 Deepali.bhavale@gmail.com
Please specify the variables used ...using a figure will be great
4 years ago  Like